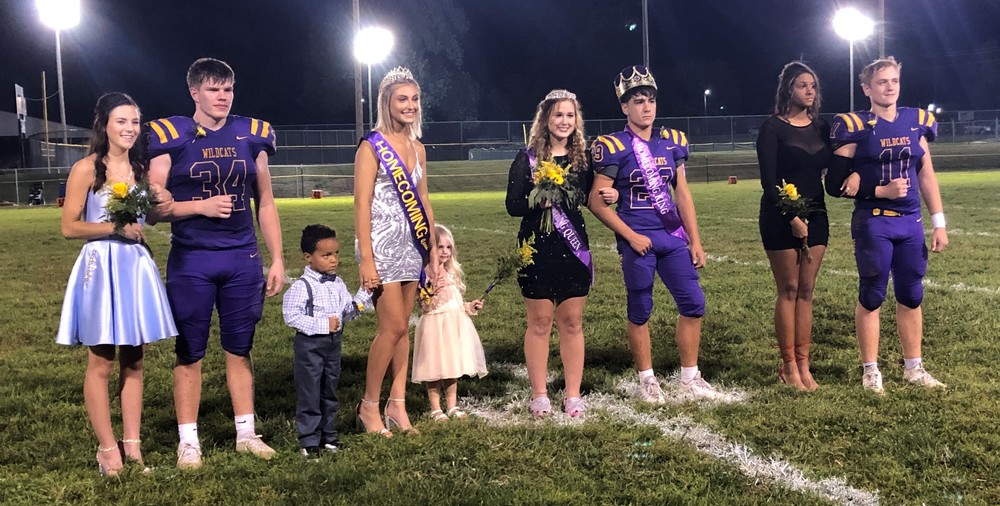 Kendyl Drummond, is the 16 year old daughter of Becky Drummond and Kip Drummond.  Kendyl is currently the class president for the Junior class, FBLA Social chair, student council treasurer, NHS, Basketball, Cheerleading, and yearbook staff.  Kendyl’s hobbies include playing with her nephew's pups and going to sporting events.  After school Kendyl plans to attend Missouri State University and major in early childhood/ elementary education.  Kendyl’s favorite quote is: “Be yourself; everyone else is already taken”

Kendyl is being escorted by Benjamin Carver:  Benjamin is the 17 year old son of Elissa Fizer & Jarred Beyer.  Benjamin is currently a senior and active in Football and FFA. Benjamin’s favorite hobby is being with his friends.  Benjamin is still unsure of his plans after high school.  His favorite quote is “When you reach the end of your rope, tie a knot in it and hang on” Franklin D Roosevelt

Aubry Meyer is the 17 year old daughter of Stephanie & Paul Meyer.  Aubry is currently junior class secretary, and is involved in NHS, Student Council Secretary, FBLA, FFA, Yearbook staff, and basketball.  Aubry’s hobbies include: Riding four wheelers, watching movies, and going to the races.  Aubry’s plans to go to school to be a real estate agent.  Her favorite quote is “Never regret anything that made you smile”

Aubry is being escorted by Tyler Malin:  Tyler is the son of Michele Malin & Rick Malin.  Tyler is currently a senior and is involved in Football, Basketball, Baseball, & FBLA.  Tyler’s hobbies include Fishing, late night drives, rodeos, and hanging out with friends.  Tyler plans to attend college and pursue a career in Physical Education or Criminal Justice.  Tylyer’s favorite quote is: “it isn’t the hours you put in, but what you put into the hours' ' Sam Ewing.

Mackenzie Nelson is the 18 year old daughter of Tami Jenkins.  Mackenzie is currently the Class president of the Senior class, Student Council President, FBLA President, and involved in NHS, Basketball, Softball Manager, and A+ Club.  Mackenzie’s favorite hobbies are spending time with family and friends, watching movies, and reading.  Mackenzie plans on using her A+ hours and attending State Fair for elementary education, and will transfer to UCM to major in early childhood special education.  Mackenzi’s favorite quote is: “when one door is closed, another is opened”.

Mackenzie is being escorted by Griffin Moore:  Griffin is the 17 year old son of Aimme & Justin Moore.  Griffin is a senior and is currently the FFA Vice president, and area 6 treasurer, Griffin is involved in Baseball, Track, Football.  Griffin’s favorite hobbies are hunting & fishing.  After high school Griffin plans to attend state Technical School.  Griffin’s favorite quote is “Perfection is not attainable, but if we chase perfection we can catch excellence” Vince Lombardi

2020 Queen is Dawnann Hager: DawnAnn is the daughter of Trish and Mitch Hager.  She is a freshman at Missouri Valley College, where she is majoring in early childhood education.  DawnAnn’s favorite thing about Homecoming is the atmosphere.  She says that she loves seeing the community come together and misses the spirit days and assemblies.  She added, “I would do anything to go back and scream T-E-R one last time in those gym bleachers.”

Our 2020 Homecoming King is Keegan Zdybel, who is unable to be here this evening. Keegan is the son of Chris and Debbie Zdybel. Keegan is a freshman at Dakota Weslyan University, where he is majoring in business administration and playing football for the Tigers.

Charlie Key, is the 3 year old daughter of Hannah & Tyler Key.  Charlie’s favorite animal is a Kitty.  Charlie would like to be a ballerina when she grows up.

Arin Falls, 3 year old son of Tonya and Eric Falls.  Arin would like to be Marshall from Paw Patrol when he grows up.  His favorite animal is a dog