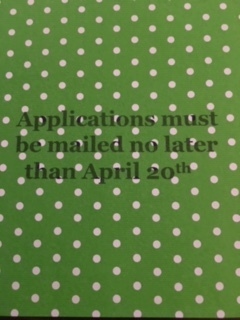 Basic Criteria for Scholarship Awards The student must be a resident of Missouri. Applicants must be under the age of 21, unmarried and a descendant* of a veteran with at least ninety days active service in the U. S. Army, Navy, Air Force, Marines or Coast Guard, who received an Honorable Discharge for such service. A photocopy of the veteran's DD 214, discharge or separation notice must accompany the scholarship application. Any additional requirements for each scholarship are on the reverse side of the application.

M.D. "Jack" Murphy Memorial Nurses Training Fund - Currently one $1,000 award is given for two successive semesters, and may, by application, be extended for two additional successive semesters. This award is available to a Missouri boy or girl training to be a Registered Nurse, and may be used in their freshman or subsequent college years. The student must have graduated in the top forty percent of their high school class or have a "C" or equivalent standing from their last college or university semester. Scholarships are awarded for one year, payable $375 per semester.

Joseph J. Frank Scholarship – Five awards of $750.00 are given annually to individuals who are descendants of a veteran. Applicant must have attended a full session of The American Legion Boys State or The American Legion Auxiliary Girls State program. Applicants must be unmarried, under the age of 21, a current resident of the state of Missouri and must use the scholarship as a full time student in an accredited college or university.

Erman W. Taylor Memorial Scholarship - Two $750.00 awards are given annually to a student planning on obtaining a degree in education, in honor of this Past National Executive Committeeman from Missouri. To be eligible, individuals must: (1) be a descendant* of a veteran who served 90 or more days of active duty in the armed forces and having an honorable discharge; (2) be a Missouri resident; (3) use the award as a full-time student at an accredited college or university; (4) provide a copy of the discharge certificate for the veteran on whose the application is made; and (6) submit an essay of 500 words or less on the  subject In your opinion, what was the most significant world event of 2018/2019?

Shane Dean Voyles Memorial Scholarship - One $750.00 award will be awarded, annually. (1) Each school in the State of Missouri may nominate one student to be considered for the award. (2) The nominee will be selected on athletic, scholastic and leadership abilities. The nominee should be deeply involved in community and school activities. (4) Must use the award as a full-time student at an accredited college or university.

Copies of the scholarships may be obtained on the web at www.missourilegion.org Some applications require a counselor’s statement be attached.